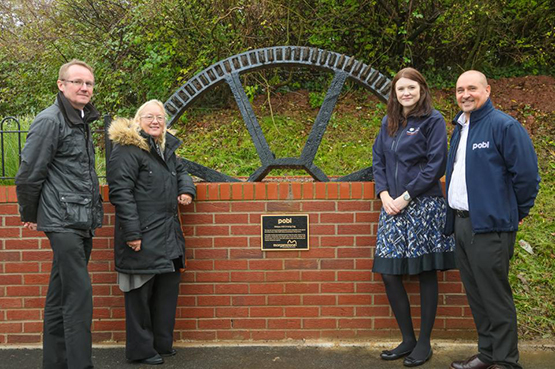 The unveiling of a nineteenth century cog marked the official opening of the new housing development, Old Mill Court. The development is a partnership project between Morganstone and Charter Housing, part of the Pobl Group and Newport City Council.

During the course of the preparation works undertaken on the site of the former Merry Miller public house, the old cog was discovered and identified as being part of Malpas Mill which formerly stood on the site. The Mill was constructed in the mid to late 19th century and was destroyed in the period after the Second World War. The cast iron driving cog would have transferred power from the water wheel to the grindstone mechanism and formed part of the mill.

As part of its community engagement work, Morganstone undertook a heritage project to restore and return the cog to its place of origin. The cog now stands on a plinth within the development and boasts a special commemorative bronze plaque in recognition of the history, that residents and the surrounding community will now share.

“Being involved with redevelopment projects are always unique in their own way and the Old Mill Court redevelopment was no exception, with the opportunity to transform a run-down public house into much needed affordable housing in the area. Then to come across the cog from the old mill during construction just added to the history of the project and thankfully we were able to uncover, store and retain the cog throughout throughout the construction period and allow future generations to see a piece of our history”

Entries by this author 10

View all entries by Antonia John