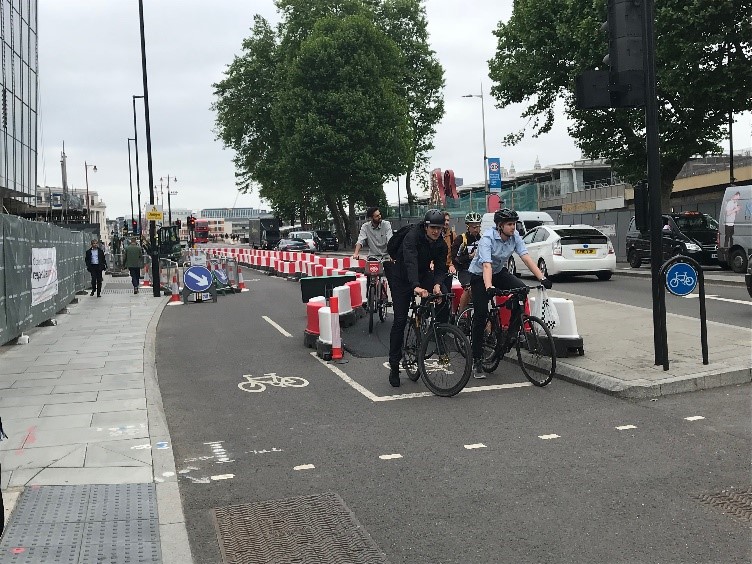 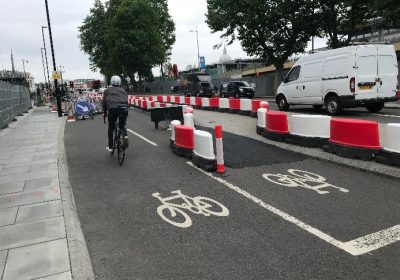 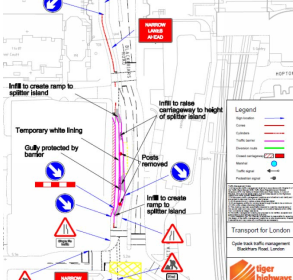 St George have undertaken an approach in conjunction with TfL to ensure cyclist & pedestrian routes are maintained whilst the external works take place at One Blackfriars.

We have rerouted Cycle Superhighway 6 – one of TfL’s most highly trafficked cycle routes – to ensure this can remain open at all times. The initial proposal was to shut the northbound lane and divert cyclists into the carriageway – this would have increased congestion and presented a greater risk to cyclists, so instead we utilised the central reservation as a cycle lane via ramps, introduce pin down kerbs and infill material to bring the surface to one level.

Specialist Traffic Management has been incorporated to maintain segregation between cyclists and traffic, including installation of specialist bollards to create a segregated route. All street furniture was removed and drainage added to the new surface area.

There has never before been a TM scheme in London whereby the approach has involved such extensive and wide ranging consultation, including engaging with bespoke cycle track users who are not normally considered during the design process.

The diversion is suitable for wheelchair adapted cycles, 3-wheel cargo bikes, long wheel base cargo bikes, trailer cycles and modified cycles for the blind and visually impaired. We have undertaken site visits and tests of the new TM proposals by these groups.

Through this scheme, we have set the standard for reducing disruption from street works and maintaining safe travel for all vulnerable road users. We have also raised standards for collaboration and engagement with all affected parties during the design and implementation process.

Entries by this author 7

View all entries by Jessica Dowdy