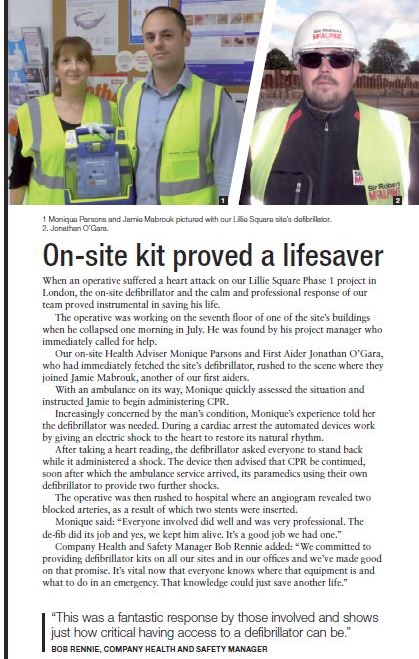 When an operative suffered a heart attack on our Lillie Square Phase 1 project in London, the on-site defibrillator and the calm and professional response of our team proved instrumental in saving his life. The operative was working on the seventh floor of one of the site’s buildings when he collapsed one morning in July. He was found by his project manager who immediately called for help.

Our on-site Health Adviser and First Aider, who had immediately fetched the site’s defibrillator, rushed to the scene where they joined another of our first aiders. With an ambulance on its way, the site nurse quickly assessed the situation and instructed the First Aider to begin administering CPR. Increasingly concerned by the man’s condition, the nurse’s experience told her the defibrillator was needed.

During a cardiac arrest the automated devices work by giving an electric shock to the heart to restore its natural rhythm. Soon after this the ambulance service arrived, its paramedics using their own defibrillator to provide two further shocks.

The operative was then rushed to hospital where an angiogram revealed two blocked arteries, as a result of which two stents were inserted.

The operative is now recovering in hospital and as a result of the event all sites in the company are required to have a defibrillator.

All workers of the sub-contractor are also giving one hour of their weekly wage to help support the victim and his family while he is recovering in hospital and off work. The site also organised a 5 a-side tournament to raise funds and also acted as a teambuilding exercise for the project.

Entries by this author 12

View all entries by Richard Charlesworth