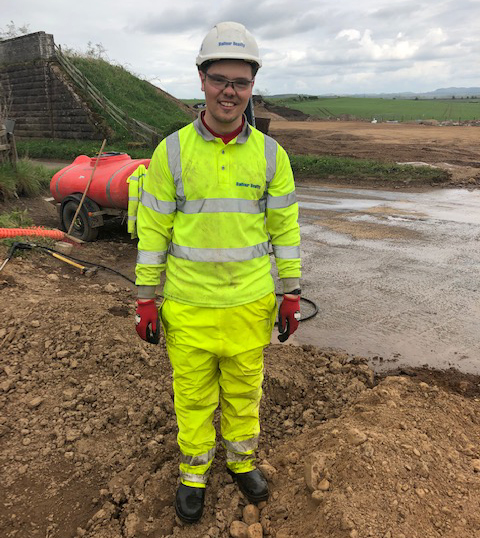 Balfour Beatty are working with a number of different employability providers to create opportunities for people to find work and train. A key partner in this endeavour is Remploy, who are delivering the FairStart Scotland programme on behalf of the Scottish Government in Tayside.

FairStart Scotland builds on the success of other transitional services such as Work Able Scotland and Works First Scotland. These programmes have been running over the past year and are on track to support over 4,800 people into employment. The fundamental differences with the FairStart Scotland programme are that it is entirely voluntary, and that candidates and employers receive a full year of in-work support to ensure that they have the best chance at a sustainable job outcome. Over the course of the project to date, four candidates have been taken on through FairStart Scotland.

Starting in Spring 2019, Ryan Buchanan was referred to the project’s Community Benefits Advisor by Neil Bell, Account Manager for Remploy in Dundee. Ryan was offered a short placement which very quickly became an offer of employment through Balfour Beatty. Some months later, a vacancy became available within the onsite materials testing lab. Remploy sent a number of candidates to be considered, which led to Kris Crossan successfully securing a placement that became a full-time job opportunity. At the very end of 2019, two further opportunities became available, this time as engineers’ assistants. Four candidates were put forward from the Remploy team with two people, James and Daniel, securing placements and jobs.

Entries by this author 8

View all entries by Duncan Gardner