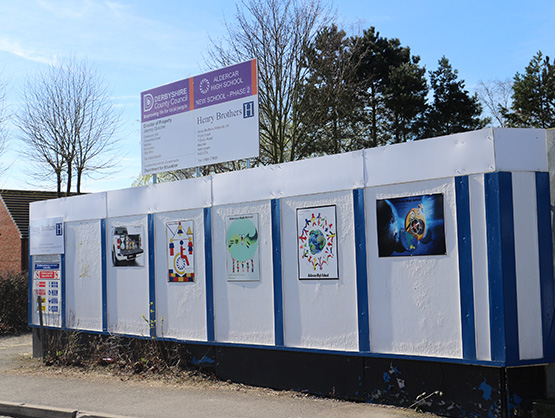 It was decided that the students of Aldercar would paint the hoarding at the entrance of the site for Aldercar Community College. There are four houses within the school, so it was decided that each house would be given two topics that surround CORE – a framework for identifying and measuring corporate responsibility activity and performance across organisations within construction

The topics were distributed as followed:

The emphasis for students will be to come up with a concept by merging the two topics.

The junior school were expected to merge the two ideas together to form one piece of art. The winning piece that was chosen  from each piece was given to Year Fives- so that they could take that art and re-imagine it. Once they had finished their pieces, they were then given to the sixth form, who had the responsibility to take that art and Photoshop it.

Something as simple as a hoarding competition has worked its way into the school’s art curriculum- allowing the students to take artistic freedom in topics that they were once unfamiliar with. Through this process, Henry Brothers have been able to inform the students of Aldercar of the purpose of CORE.

Entries by this author 11

View all entries by Cathal Ward