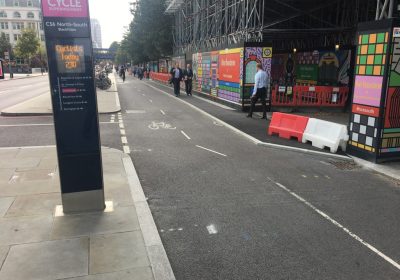 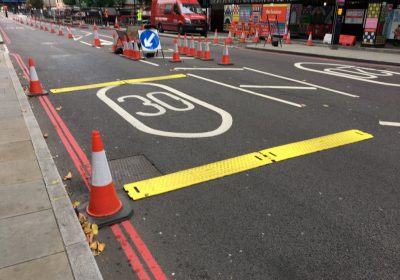 According to reports, every year more than 2,000 people are killed or seriously injured (KSIs) on London’s roads (TfL, 2016). These incidents are devastating to those involved, especially their families and other communities across London. The likelihood of a collision, and resulting death or serious injury increases substantially as vehicle speed increases e.g. if someone is hit by a car at 30 mph they have a 40% chance of being killed. However, if they are hit at 20mph they have a 90% chance of surviving.

There is an associated 6% reduction in collisions in urban areas for each 1 mph reduction in speed. With the ever increasing push to change to more sustainable modes comes the need to protect those more susceptible to injury, such as pedestrians and cyclists. Transport for London (TfL) have invested in segregated cycle ways to help promote more cycling and reduce conflict. It is also important to maintain cycling especially when these tracks are temporarily closed and/ or cycling is via roads with constrained widths.

Kier Group (Wedge House development, Blackfriars Road) were dismantling a crane over a weekend. The operation required the closure of a two-way cycle track and a reduction in remaining carriageway width to accommodate the work. To maintain cycling, it was proposed that cyclists merge with general traffic for the length of the works before returning to the cycle track. However, there was a concern with poor driver behaviour and inappropriate speeds which had been observed along this section of road. This is also an issue for the site staff that were going to be working adjacent to the traffic.

TfL worked closely with Kier and Nationwide Traffic Solutions to set up a method that caused vehicles to reduce speeds on each approach of the traffic management area thus improving the cycling and walking experience and working environment.

The method involved using ‘Road quake’ rumble strips which were positioned side by side on the road. These are slightly raised and highly visible to oncoming drivers. Observations showed that the majority of drivers (approx. 80%) reduced speed to negotiate the strips and by the time they had regained speed they were through the traffic management. The method was deemed a success with no incidents reported.

Entry submitted by Transport for London

Entries by this author 41

Construction sites are known to be a danger even to those that are not working on them. It is vitally important that all risks to the local community are considered with appropriate plans in place. Particular care must be taken for child safety at all times. Operatives will have a certain level of appreciation for general safety practices but members of the public may not. The display of safety signage is to minimise and hopefully eradicate potential accidents.