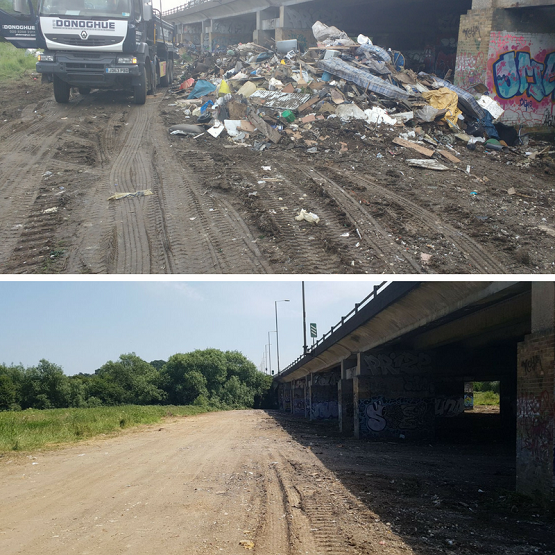 Fly tipping is the illegal deposit of waste on land contrary to the Environmental Protection Act (EPA). Fly tipping ranges from black bag waste to large deposits of materials such as industrial waste, tyres and construction materials.

Recently the A40 at Denham made national headlines when a section of Highways England land was the subject of a significant fly tipping incident. Connect Plus Services (CPS) regularly deals with domestic fly tipping on its road network, removing items such as sofas, mattresses and fridges from its verges.

More than 150,000 sacks of litter are collected by Highways England’s contractors every year as part of routine maintenance work – an average of 411 bags every day. It costs more than £40 to collect each sack – roughly the same cost as fixing a pothole – showing the real cost of antisocial behaviour like littering.

Fly tipping on an industrial scale, as seen on the A40, occurs when households and businesses allow criminals to remove their waste without carrying out the checks required by law.

In an operation that took six men 10 days, the site was cleared of all waste, including a tonne of asbestos, classed as hazardous waste, at a cost of £135,000.

CPS has increased access protection at this site, along with 13 other sites across its road network that have been used for fly tipping incidents.

Entry submitted by Connect Plus Services.

Entries by this author 8

View all entries by Cintia Bailey