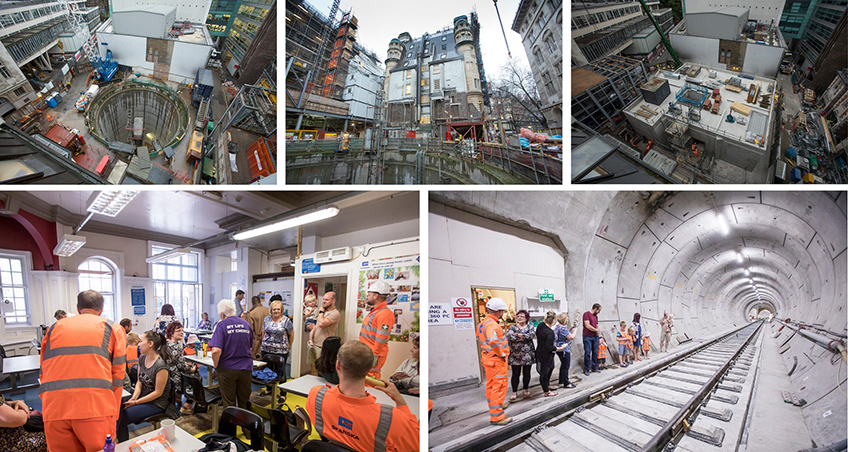 “Being located in central London and constantly being surrounded by the public, traffic and residents meant that every single aspect of work on site had to be meticulously thought through.

“When complete, this project will be an essential part of helping Crossrail to make travelling in London and the South East safer. The project will help towards reducing crowding on London’s transport network, most notably the rail network which is projected to have a 10% increase in network capacity.”

The Fisher Street site is located in Holborn, a densely built-up area in central London. The site itself has a footprint of approximately 790 square metres, is very constrained and is situated between listed buildings with a courtyard area to the rear.

“The latter three sites were awarded to C360 after the project had commenced. The intermediate shafts at all sites provide access to the running tunnels for firefighting, emergency access/egress and general maintenance.

“The site offices used by CSJV at Fisher Street are a Grade II listed building, including basement. A hotel refurbishment is being carried out by McLarens adjacent to the project site. The main building fronts Southampton Row, however, access to the site for vehicles is via a smaller side street. Work at the project site is carried out on a 24-hour basis, seven days a week except Sunday evenings.”

Overcoming the various challenges of working in busy Holborn

Asha outlines the various hurdles encountered with the work, with the main issue being the lack of space at the Fisher Street site:

A separate principal contractor working as part of the Crossrail project needed to use Fisher Street for construction of their Floating Track Slab (FTS) in the tunnels (this is the concrete track slab with a supporting resilient layer or spring system).

In order to pour the FTS, a concrete pumping station had to be installed to pump from the surface down to the running tunnels. Due to the distance the concrete had to travel, very powerful pumps were needed. These pumps had high sound power levels which could potentially impact upon local residents. Additionally, the works had to be undertaken on nightshifts. This was to minimise the potential loss of concrete from delays to deliveries as a result of London traffic.

The biggest environmental challenge was ensuring that the noise from the pumps did not adversely impact local residents. We overcame this by constructing an acoustic noise enclosure. A noise assessment conducted by Skanska pinpointed how many decibels would need to be reduced to ensure the site’s noise was below levels stipulated in the Crossrail Act criteria.

The assessment showed that a 20dB reduction at the nearest receptor was required. The final design of the acoustic shed was amended to ensure that this was incorporated. The acoustic shed had deconstruction designed into it – this ensured its removal caused minimal disruption. All materials as part of the enclosure have either been reused or recycled, thus 0% of waste went to landfill.

In addition to the estimated number of site staff expected to use Fisher Street, 150 extra operatives per shift, working elsewhere on the Crossrail scheme, were required to use the site set-up.

The biggest challenge was ensuring the welfare facilities were adequate enough to accommodate the increase in operatives, especially in an area where space is limited. A reorganisation of the site layout and additional logistics, such as daily cleaning regimes were put in place to ensure everything ran smoothly.

Here are just some of the many different examples of best practice Costain Skanska implemented on this project: