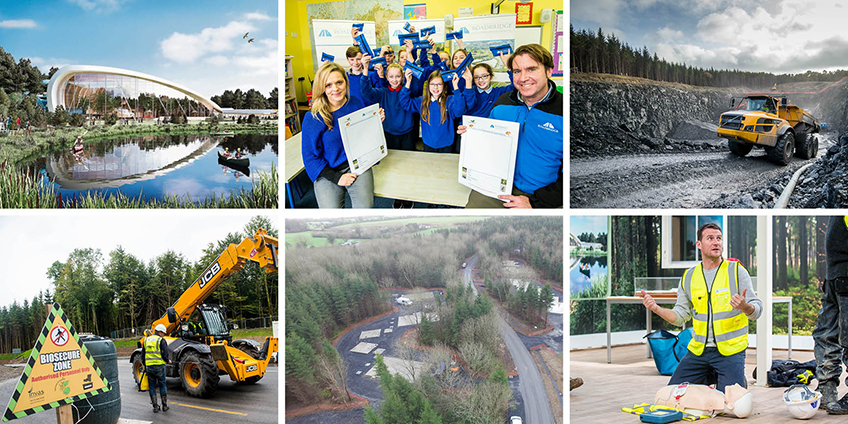 Appointed in February 2017 as Principal Contractor, Roadbridge is delivering the infrastructure for the Center Parcs resort which is due to open in summer 2019.

Work on this exciting project began in May 2017 and the first Monitor visit, just six months later, resulted in the team being praised for innovations in the areas of environment and safety.

“One of our environmental challenges on this project is to avoid the introduction of invasive species such as Japanese knotweed or giant hogweed to the area, as the forest is one of the few locations where this is not present. This led to the biosecurity protocols introduced on site.”

To minimise the risk of invasive plant species being introduced on the project, a ‘Bio Security Operations’ system was implemented ensuring that any plant machinery was cleaned and disinfected prior to arrival on the project footprint. Relevant bio security training was also given to site staff.

The project team’s safety innovation was for the development of an online CLOCS reporting form system at the site entrance area to monitor and control the inward and outward movements of plant and vehicles.

This system was introduced in addition to implementing the usual CLOCS procedures on site and involved integrating online reports into the overall safety management system. This provided additional control and feedback for the management of supplier and delivery vehicles.

“The only aspects of the Checklist that aren’t applicable in Ireland are around CLOCS and FORS, but we took the view that these principles could be used as an improvement tool for our supply chain. This led to the introduction of an electronic checklist that we complete with our hauliers, based on the CLOCS checklist. We have since implemented this system across all sites.”

It also involves foul and surface water drainage, provision of a new sewage treatment works and management of interfaces with other contractors on site for centre buildings, lodges and ancillary buildings.

In order to maintain this goodwill, Roadbridge implemented a strict traffic management plan to ensure it was not causing undue nuisance to its closest neighbours. Certain roads around the project were not allowed to be used by construction traffic or deliveries and these were clearly sign-posted.

All hauliers were instructed on the routes to take and, in the event this was ignored, the team also placed specific signs on each truck, so that a member of the public could ring the site with the reference number. Roadbridge’s value engineering initiatives on the project also led to the removal of up to 35,000 truck movements from public roads, through processing of materials from on-site borrow pits.

Outlining how Roadbridge incorporated the Scheme into its work, Peter said:

“As this is one of our first projects in Ireland to register with the Scheme, we began the process by carrying out an introductory workshop for staff with no first-hand experience of the Monitor visits, to familiarise them with the Scheme requirements.

“The Monitor’s Checklist was issued to the attendees and champions were appointed for each area of the Code of Considerate Practice. We then set about outlining what was currently in place for each requirement, alongside the actions required.

“For each item, we tried to ensure that there was photographic evidence or documentary evidence to verify it and these were added to a specially created folder on our cloud-based system. We also utilised the experiences gained from other previously registered projects, by preparing a presentation following the Checklist, with as many images as possible included.”

Peter believes that the Scheme is doing “fantastic work” in improving the image of construction, with the Monitor reports encouraging sites to constantly improve their practices.

“In this era of social media, it is very easy for anyone to be portrayed negatively, so the more we strive to adhere to the principles of the Scheme, the less the risk of a negative perception. By opening up our project to public and Monitor visits, we are also showing that there is nothing to hide, and also helping to show that working in the industry can be very rewarding.

“We have also found that the Monitors are always able to make very good suggestions about how we can improve, based on other contractors’ experiences. The availability of tools such as the Best Practice Hub provide a wealth of information.

“Overall, the encouragement to engage with the community is the real key in improving the image of our industry. Even if a company were initially to start doing this merely to score better on reports, the benefits of these endeavours would soon become obvious. It is a great way to drive employee engagement and motivation, as well as providing a link to future workers.”

Here are just a few examples of best practice implemented by the project team on the Center Parcs project: