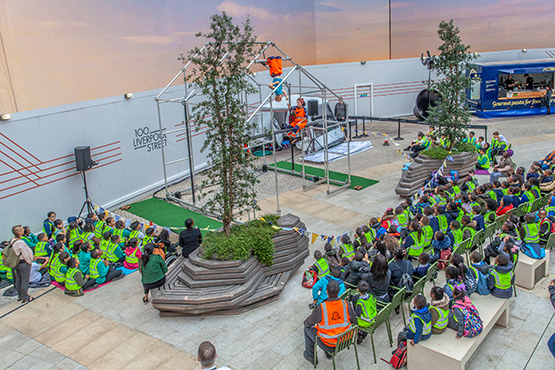 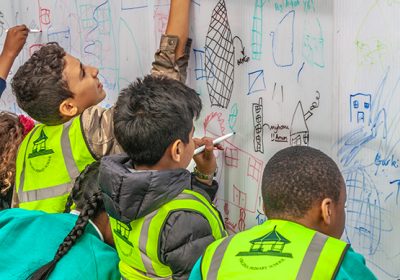 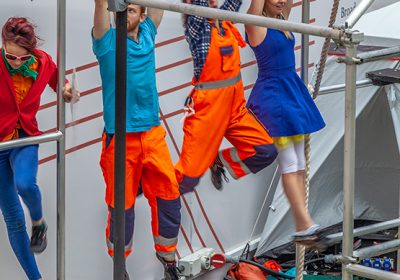 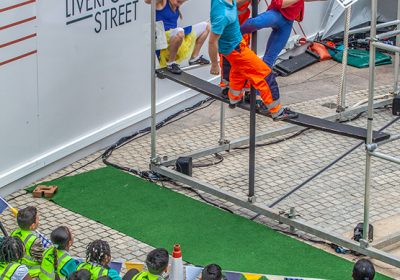 During September, as part of London Design Festival and Open House, Sir Robert McAlpine organised a series of daring outdoor circus pieces were held at Broadgate. BUILD, performed by Hikapee, used aerial, acrobatic and physical performances to explore what it is to create a building. The aim of this was to produce something entertaining with a strong link to construction and job roles within the industry.

The performance was split into two sections. The first 25 minute section was a physical performance where the audience got to watch four characters take a basic scaffold structure and produce a ‘house’ consisting of roof, walls and even a working light, through their performance. During the second section, the audience were then invited inside the structure to explore.

The pupils attending were all captivated by the physical performance of the characters and the house coming to life. Once the house was completed, they were then invited into the house to have a look around and see various video installations which featured those involved in the re-development of Broadgate talking about their jobs. The children were also invited to draw their favourite building on the walls of the house.

The events were a great success, with the performance being enjoyed by all that attended both from an entertainment and cultural point of view as well as an educational one.

Entries by this author 6

View all entries by Laura Regan