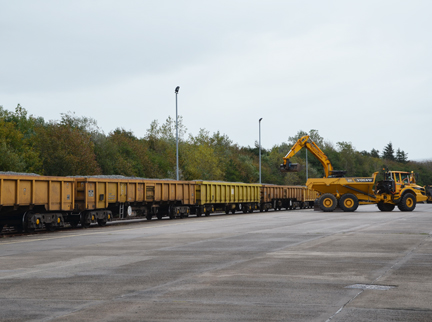 When working in an area that has strict transport management procedures it is vitally important to consider the impact on the local community when arranging a large number of deliveries.

As a direct response to mitigate the impact of deliveries on the community that resides near to the Low Level Waste Repository within the Parish of Drigg and Carleton, GRAHAM Construction utilised the local railway network.

GRAHAM Construction had to deliver thousands of tonnes of aggregate and to contend with the fact that it had been 6 years since an aggregate delivery had been made to the nuclear licensed site. There was also the fact that train deliveries were at a considerable greater cost than their road counterpart.

Working with the client and the local community it was decided that the additional cost of rail deliveries was justified because it acted as a further enabler in retention of the social licence to operate given by the local community.

As further mitigation it was agreed that the trains would make their deliveries during half term week, ensuring that the number of vehicles going through the village was minimised in the school holidays.

In addition there was the evidenced positive environmental impact and its contribution to the efficiency of the site.

Each train delivered 1,200 tonnes of aggregate reducing the requirement for 120 vehicle movements per train, avoiding 15 separate days of transport disruption to the Drigg community.

Within the week, four train deliveries were made, which in total removed 480 HGV’s off the road and avoided 60 days of vehicle movements through the village.