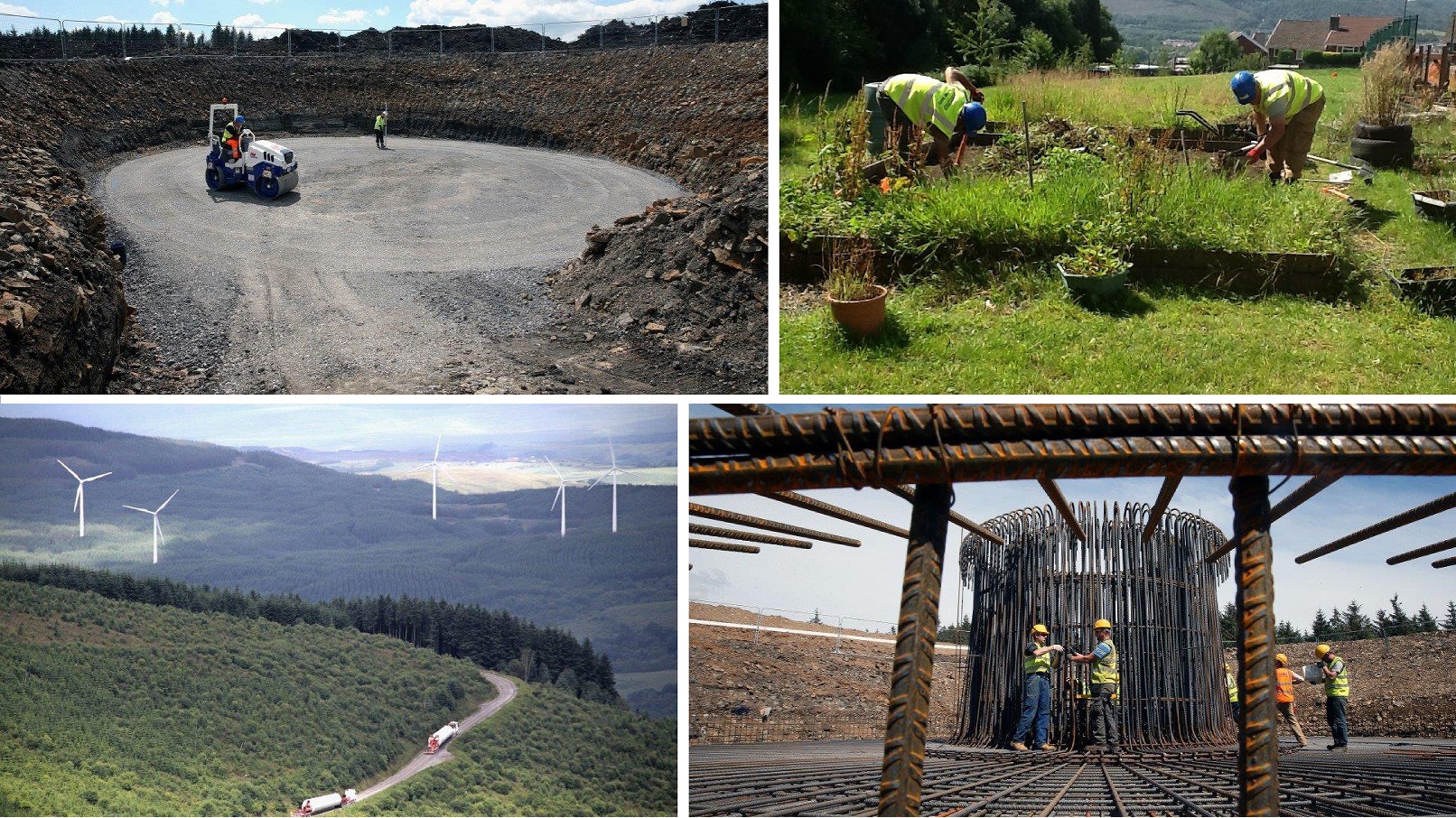 The project generates enough electricity to power 188,000 homes, making it the largest onshore project in England and Wales, based in Rhondda Cynon Taf, near the Brecon Beacons National Park.

“The project involved major civil engineering works, comprising of 6000 tonnes of steel and 50,000m³ of onsite batched concrete used in the construction of the turbine bases and crane pads. Due to the sheer size of the site – 4600 hectares – 85km of tracks were either constructed or upgraded, as well as the supply and installation of 450km of cable. Over 1.5million tonnes of rock, subsoil and peat were excavated, including 700,000 tonnes of excavated rock which was used for haul roads and crane pads.

“All of this work was carried out in a remote, inhospitable and environmentally sensitive landscape, just south of the Brecon Beacons. The site is 500m above sea level and included not only a Site of Special Scientific Interest (SSSI), but a Scheduled Ancient Monument (SAM).

“Sustainability and social impact were of great importance on this project. Throughout the project, nine local apprentices were recruited and over 70% of our workforce was sourced from within a 35 mile radius of the site. Project planning and site team mobilisation commenced in late 2013, and the project was completed and handed over by the middle of 2017, at a final price of £56 million.”

Due to the large area of the site, footpaths and trails crossed over the site, traffic marshals were set up to assist movement of traffic at junctions and oversee cyclists and walkers. To encourage this, a ‘Wave Hello; Wave Goodbye’ initiative was set up; this encouraged the public to make eye contact with our drivers. At busy junctions, segregated pedestrian walkways were also installed. Extra flashing strobe lights were also installed on the plant; orange at the front and blue at the rear when reversing.

Education cabin set up on site

To help keep the local community updated, construction communities were set up between local residents, businesses, councils, National Resources Wales and community groups. Notice boards located around the site shared project updates and communicated details of specific footpath closures. To help communicate with the general public as a whole, social media sites such as Facebook and Twitter were utilised, as well as a blog.

In addition to this, an education cabin was setup onsite. Community members and school pupils took part in over 400 visits, and due to the success of the cabin, it will now remain there permanently.

Due to the volume of concrete on this project, the sheer number of concrete wagons would have disrupted local communities over the duration of the project. To help mitigate this, a batching plant was installed on site, which effectively eradicated this problem. Boreholes provide 100,000 litres of water per day for the batching plant.

To help protect the environment, a sewage treatment plant was installed on the site accommodation. Without this new plant, a tractor would have to tow away a large tank to remove waste once a week. The sewage plant has to be cleaned only once a year.

The site is home to numerous environmentally sensitive areas; Craig y Ilyn (SSSI) and Ffos Toncenglau Dyke (SAM), as well as 47 archaeological sites. To help manage and oversee these sites, the project employed a full time environmental officer, who in turn was supported by two ecologists, one peat specialist and a full-time archaeologist. These helped to oversee the works around these particularly sensitive areas. Project-specific construction constraint checklists were developed and utilised throughout the project.

These were used in conjunction with extensive site monitoring which included:

There were over 450 watercourse crossings and due to the large plant movements and earthworks over the site, water run-off and pollution were of major concern. Again, a site-specific log was created. The Silt Mitigation Handbook was drawn up and a dedicated environmental foreman managed an eight-man strong silt mitigation team. This team was responsible for installing numerous mitigation materials such as silt fencing, sedimats, ultra rocks, lagoons and PH neutralising silt-busters, including concrete wash water.

To prevent dehydration of the peat around foundations, peat receptor areas were created with plastic sheet piling. The receptor areas were designed to receive the excess peat from turbine excavations. The majority of this peat was used to construct new peat bogs. Some of this 40,000 tonnes of peat set aside for reuse was embedded with sand for cable bedding and protection.

The water for the project was obtained from four bore holes located on the site. This allowed for minimal disruption in transporting water from a nearby reservoir and therefore eliminated the need for significant lengths of piping that could have affected the local community.

Due to the vast size and number of excavations on the site, the removal of waste could have caused great logistical problems. All of the waste on site was segregated for recycling. This ensured that no waste was sent to landfill. In addition to this, over 700,000 tonnes of rock was processed for haul roads and crane pads. This helped to minimise the haulage off-site, minimising the interface of the public with large haulage vehicles, as well as helped to reduce the carbon footprint.

To help address unemployment in the local community, the project engaged with schools and facilitated upskilling through apprenticeships. Nine local residents were employed through apprenticeships and the project helped them to develop and gain experience in construction. To improve the social impact furthermore, 70% of labour was recruited from within 35miles of the site.

Here are just a few more examples of best practice carried out by the site team working on this project in accordance with the Considerate Constructors Scheme: