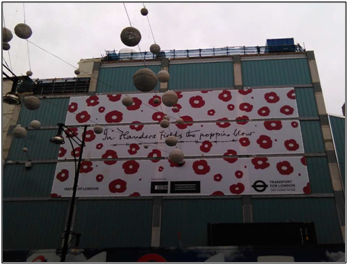 In November 2015, Costain took part in selling poppies for Remembrance Day. In total, we managed to raise a total of £1230.97 for charity. Costain workers stood out and distributed themselves across Bond Street station in order to cover as wide an area as possible and help raise money for charity.

There were many scenarios which took place on the day that made the people who took part really take pride in what they did and feel good about their contribution to the charity.

In one such scenario, a French tourist approached with his son inquiring about Remembrance Day, however the worker from Costain didn’t know any French, but instead spoke to the father through his son, who acted as a translator between the two. This way he managed to teach both of them what the day was about.

As well as supporting the charity by selling poppies, Costain also showed support by putting up a massive 18.5m x 9.5m banner on the front of the construction site. It was funded by TFL, Costain and Laing O’Rourke.

View all entries by Angelika Chraska-Pongo