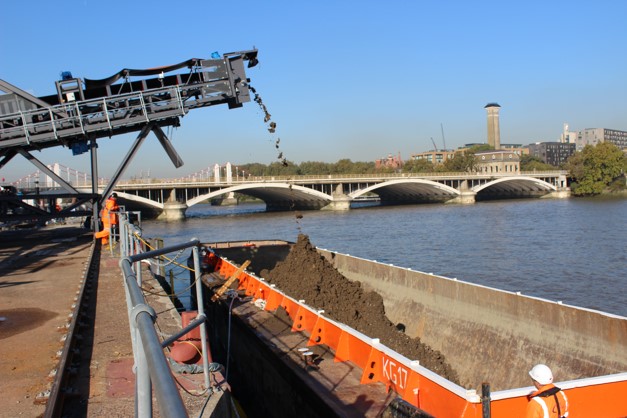 The Northern Line Extension project involves the construction of two brand new underground stations (Nine Elms and Battersea), two ventilation shafts (Kennington) and two 3km long tunnels that extend the existing Northern Line out to Battersea. Constructing this generates a huge amount of excavated material, which FLO were challenged to find a beneficial reuse for.

It was clear early on that there were no suitable options for reusing the material locally, so the solution was to send the material to be used at a site in Essex that needed clean earth to build over a Victorian landfill and restore it to arable land. This site (Goshems Farm) was adjacent to the River Thames and therefore well suited to receiving material by river transport rather than road.

In addition the barge operator, GPS Marine, procured brand new barges with a bigger capacity (1100T), equivalent to 65 wagons each.

The combination of these measures will result in the avoidance of almost 50,000 wagons travelling on the already busy roads of London, thus significantly reducing congestion, air pollution and the risk of collisions.

Entries by this author 11

View all entries by Matt Brinklow

The Registered Activity must optimise the use of resources, including minimising carbon throughout the value chain.